Marine Buffer® will safely raise marine pH to 8.3. It will not raise pH above 8.3 even if inadvertently overdosed. Marine Buffer® is a blended product and is not just sodium bicarbonate or sodium carbonate, commonly sold as a substitute. Such products can raise pH to dangerous levels if not used properly. Marine Buffer® contains sodium, magnesium, calcium, strontium, and potassium salts of carbonate, bicarbonate, chloride, sulfate, and borate. Use Seachem’s MultiTest™ Marine pH & Alkalinity to check pH and total alkalinity. Use Marine Trace™ to restore the proper level of trace.

Total Alkalinity is a measurement of three main ions: carbonate, bicarbonate, and borate.
In saltwater, bicarbonate drives the pH toward 7.8, carbonate drives pH toward 9.1, and borate toward 9.5 or more.
Because of the chemistry of buffering systems, the closer you get the pH to the pK of a buffering system, the harder it is for the pH to shift.
So, if you blend a buffer so that the combined product drives the pH toward 8.3, then the more you use, the more stable the pH becomes.
That is the principle behind Marine Buffer™. It is a blended buffer that drives and holds your pH at 8.3 because of the blend.
The catch to this seemingly simple solution is that most salt mixes contain substantial amounts of bicarbonate salts.
This shifts the pK of the buffering system further towards 7.8, and a buffer that shoots for 8.3 will never quite get there.
Thus, the pK of Marine Buffer is actually slightly higher than 8.3 in order to combat the influx of bicarbonate at every water change.
Marine Buffer™ was the first buffer on the market which contained borate salts (which make a saltwater buffering system much more stable), and Marine Buffer™ remains the most effective pH buffer on the market for marine aquaria. 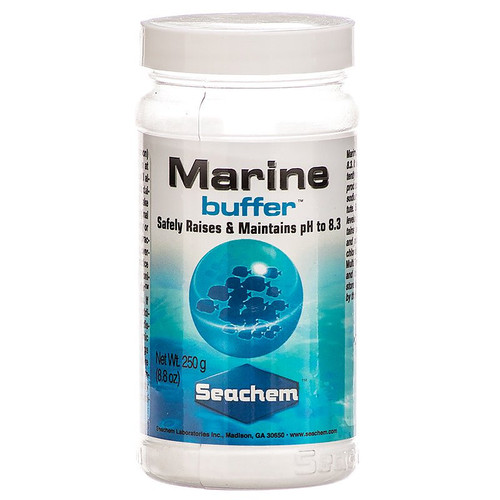